Chelsea’s third kit color scheme for the 2022/2023 campaign has been released. which consists of blue and optic yellow with the away and third strips yet to be launched by the club, it’s sponsors, shop partner and fanatics. 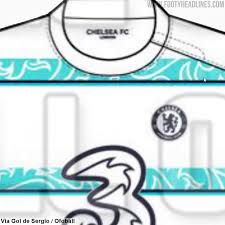 According to footy, they stated that Chelsea have shared the color scheme of 2022/23 third kit ( home and away) ‘combined a black base with golden used for logos’, orange detailing round off made by Nike Chelsea 2022/2023 third football kit.

However, none of this specific detailing around the design of the kit is known so far as the color scheme is not 100 percent confirmed yet.

And according to a report, it’s also revealed that launching date for the 2022/23 third kit color scheme will be August 2022 and the third kit to be used in Champions league and other competitions.

Don't forget to subscribe to our social media pages